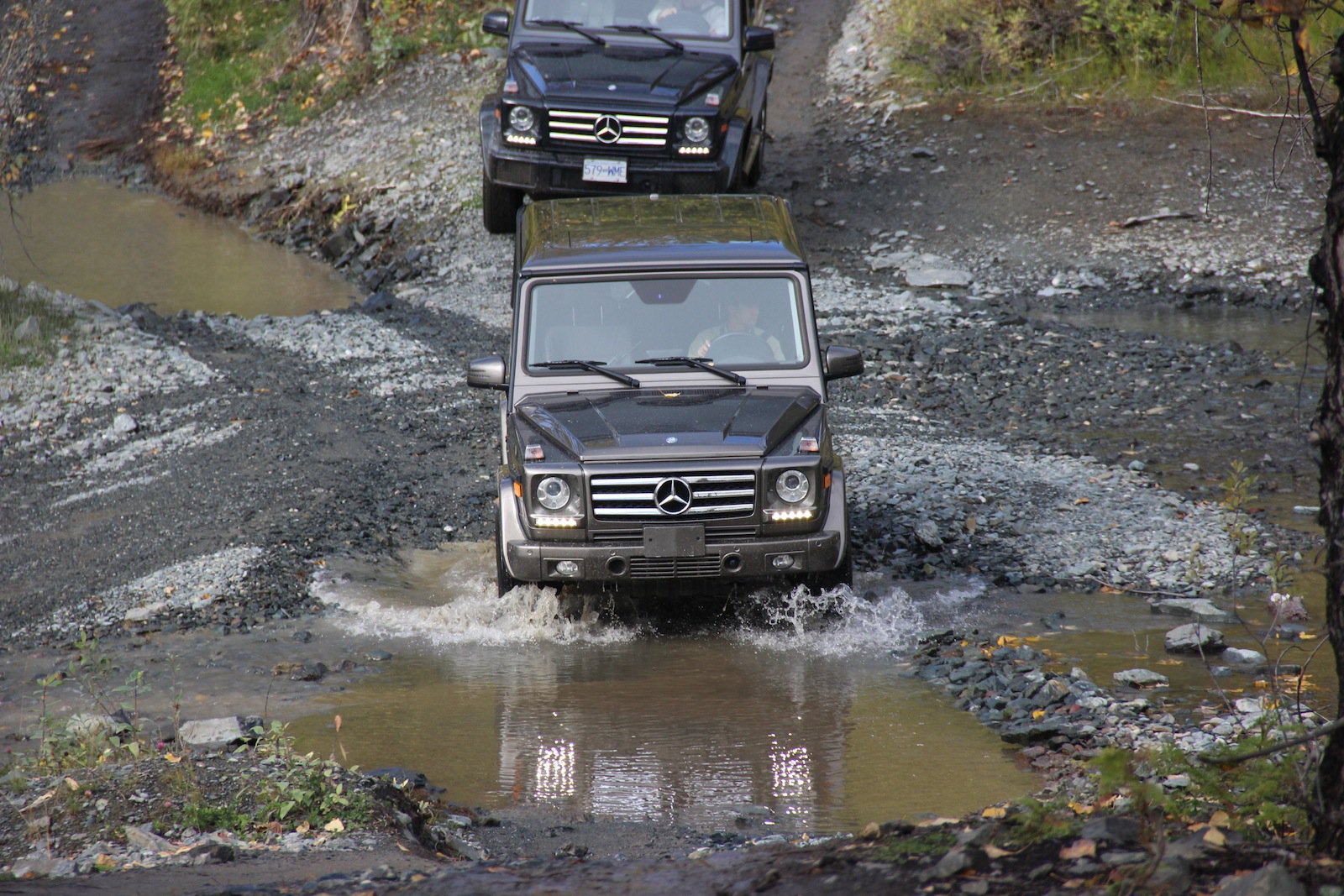 Heritage is always a consideration when automakers design new vehicles.

Brands love to bake a little past flavor into new models, in part to appeal to the nostalgia of buyers, but also to celebrate their past. Park a modern Mustang next to a classic and you’ll see a little bit of the past dictating the present.

Park a Mercedes-Benz G-Class next to an original model and you’ll see what it’s like to barely change the recipe at all.

There are no other vehicles on the market, save for the Porsche 911 perhaps, that have remained so close to their original styling than the Mercedes-Benz G-Class. You need only see the body lines, lifted straight from the 1979 G-Model, to understand how the so called G-Wagen has evolved.

Sure, the powertrain and interior are thoroughly modern, but it’s the locking differentials, body-on-frame construction, lack of aerodynamics, and overbuilt nature keep this beast entirely old school.

And its ethos is still the same as the original 1979 G-Model: to go anywhere, regardless of whether roads are present or not.

What has changed the most is the powertrain. Back in 1999, Mercedes first allowed the speedy engineers at AMG get a hold of the G-Class, sticking a 5.5-liter V8 under the hood with 354 horsepower, a respectable number for the day but a laugh in 2016 terms. Now, the G550 model uses a 4.0-liter biturbo V8 that makes 416 hp and 450 lb-ft of torque, setting itself apart with what the brand calls ‘Hot V’ placement for the turbo, which nestles the boost unit right between both cylinder banks

It’s hooked up to a seven-speed automatic transmission complete with paddle shifters to allow the driver to have more control over the vehicle, an important attribute when it comes to heading off road. And our time with the G550 was spent mostly with nothing more than dirt, mud, and gravel beneath us

Of course, the interior is also nothing like that old G-Model. Modern luxury is in no short supply thanks to gorgeous leather, which can be had in a multitude of colors (choose brown to hide the mud).

All of the materials and the switchgear feel at home in a Mercedes, though there is something that is betraying this luxury cabin: its shape. Because of the vehicle’s shape, the dashboard is upright, with everything on the inside coming across just as squared off as the exterior.

Some people may like this hard line styling, but the gorgeous sloping curves of a Range Rover offer so much more natural style.

For space, the G550 offers 41.9 inches of rear seat legroom, more than enough for a full-size adult. Out back, 79.5 cubic feet of trunk space is available. 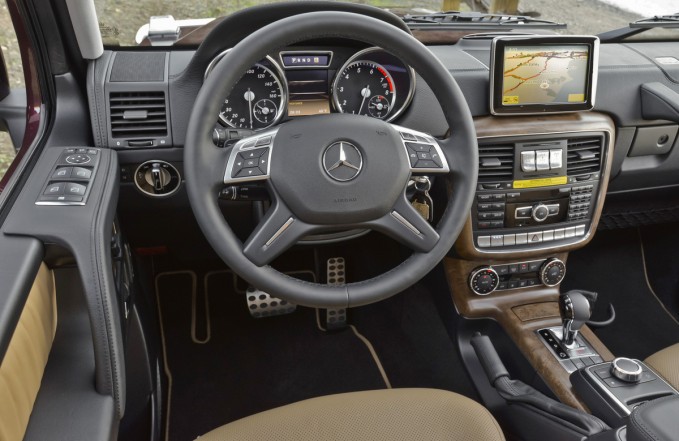 The mountains around Whistler, British Columbia in Canada presented us with an excellent playground to put the G-Class to the test, and in typical West Coast fashion, the rain made sure that traction was hard to come by. Mercedes-Benz Canada hosted the G-Class experience this year, which allows current and prospective Mercedes customers to experience its off-road machine in a wonderful location, and the Rocky Mountains are certainly that.

Setting out for the trails, it’s hard not to notice what a boat the boxy Mercedes is on the road, listing and tilting through corners like a schooner in the wind. The steering feels slow, contributing to the relaxed, lumbering nature of this beast on the pavement.

Adjustable dampers allow ‘sport’ mode to stiffen the suspension up, but even then, the weight of the G550, at 5,724 lbs (2596 kg), pushes the vehicle wide through corners while it still leans more than most modern crossovers and SUVs.

That weight does seem to work in the G’s favor on the straights, though, pushing it into the ground hard enough to keep it tracking nice and straight, with little to no input from the driver needed.

When a vehicle is so singular in purpose, it is bound to make compromises and it is abundantly clear that the on-road ride of the G-Class is such to make sure that when the road ends, all of the controls feel natural and confident. 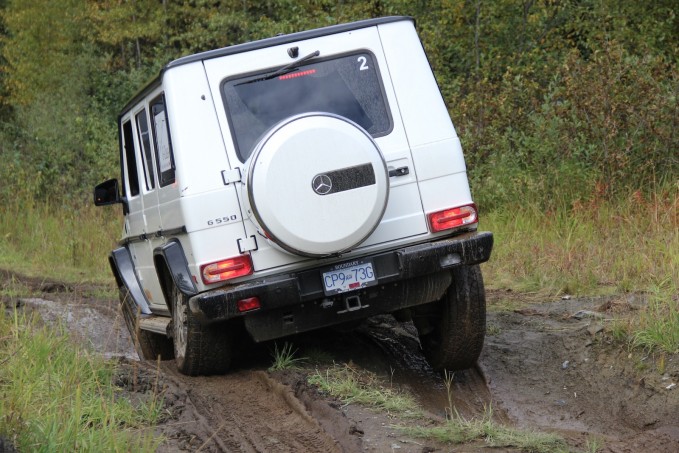 Hitting the lowest part of the trail, a rutted gravel road, already began to expose the true nature of the G-Class. Thanks to that slow steering, harsh potholes don’t try to rip the wheels out of your hands. They also don’t throw around the occupants, because the soft suspension setup works hard to keep the body of the G isolated from whatever it is running over.

Ground clearance for the G550 didn’t prove to be a problem, with 8.1 inches, though that is far short of the 11.6 inches of clearance you can get from a Range Rover with air suspension. A 30-degree approach and departure angle are available thanks to the short overhangs of the G550. Our hitch rubbed a few times, but contact with the ground was minimal. 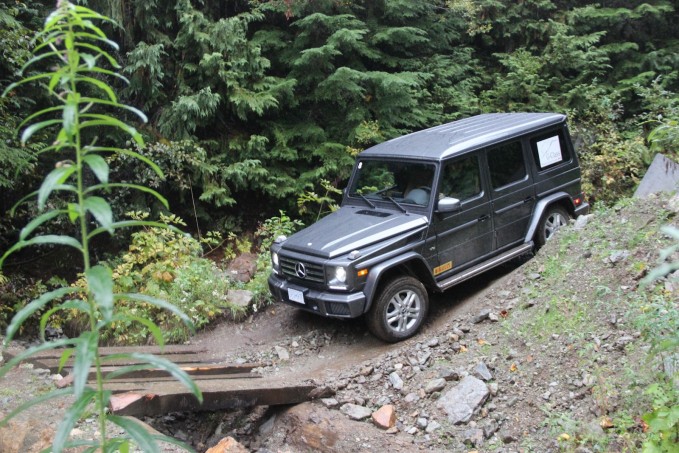 As we climbed higher into the mountains, passing over 4,500 ft (1370 meters) according to the internal readout, the trails and oxygen became thinner and the steep drop offs promised that the consequences were no longer a joke.

Throttle input is incredibly sensitive and the heavy weighting of the pedal allows you to crash over your intended terrain in the most delicate of ways. Mechanical sympathy always has to be on your mind when heading off road, and the precision of the throttle combined with low range ensure you can treat the G-Class real nice.

For nearly the entire time off pavement, we had the center differential of the G-Class locked up, which means that the power split is 50/50 front to rear. Climbing mud hills and slick rocks only produced the slightest of wheel slip, and when the angle of the hills became too much, locking the rear differential was enough to lay down enough torque to keep things moving. If things get really slippery, you can also lock the front differential, which means that all of the V8’s power is sent evenly to each wheel. When combined with low range, the G550 is putting an incredible amount of torque to its wheels, helping it crawl over whatever it wants. 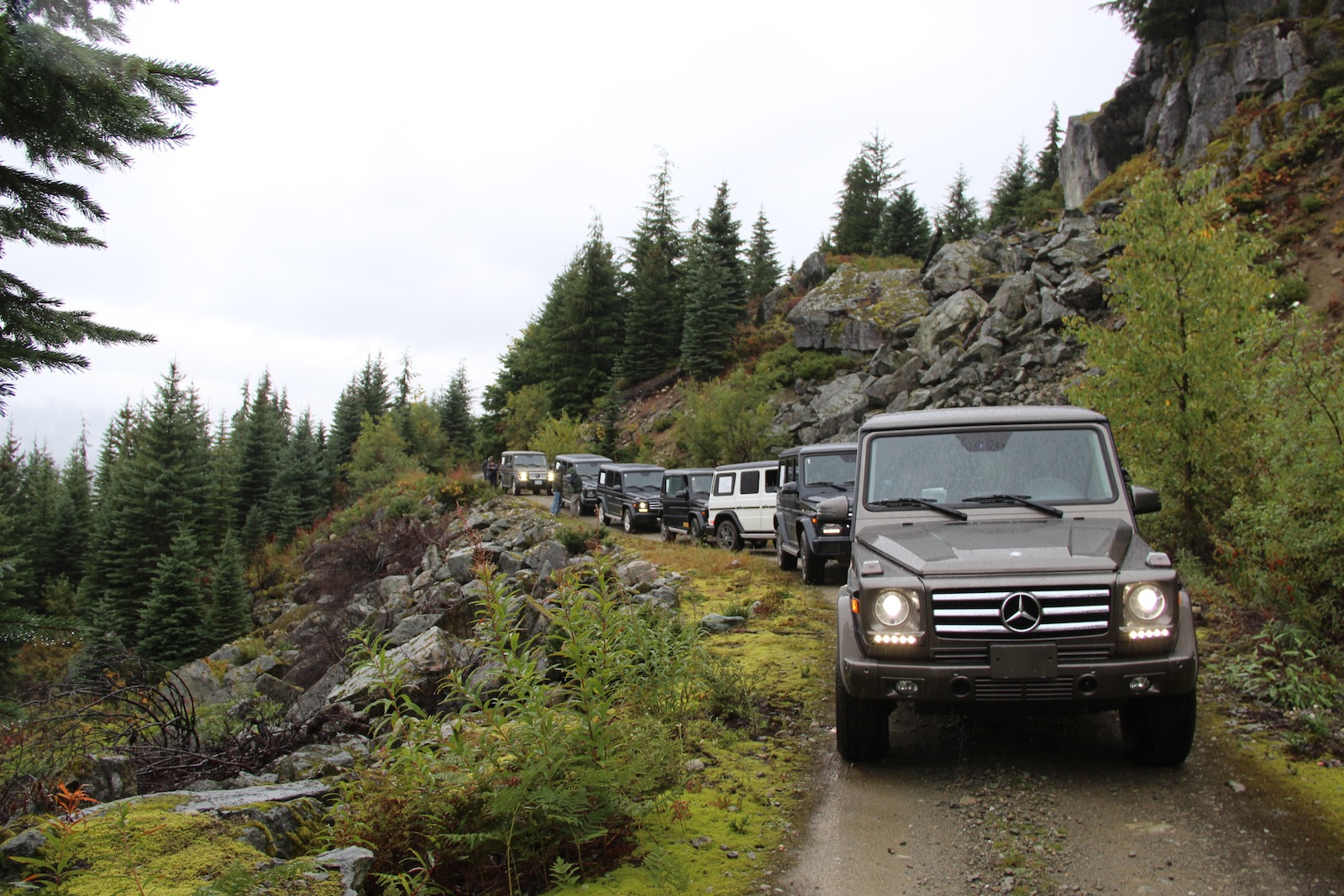 Capability doesn’t come cheap, sure, but the price tag of the G-Class has more to do with who will buy it than what it is. It has become a status symbol among the well-heeled.

Celebrities have flocked to the G-Class for years now, not for the capability or the history, but simply for the image. Every G has a certain imposing nature, and in a world where SUVs and crossovers are turning to swoopy designs that simply help them blend in, the G is a middle finger to the modern idea of what an SUV should be.

It’s these customers who are snapping up the G-Class and they are willing to pay for that image. Hopefully, they don’t forget to lock the differentials on the drive out to the Hamptons, because we all know those gravel roads can be tricky. 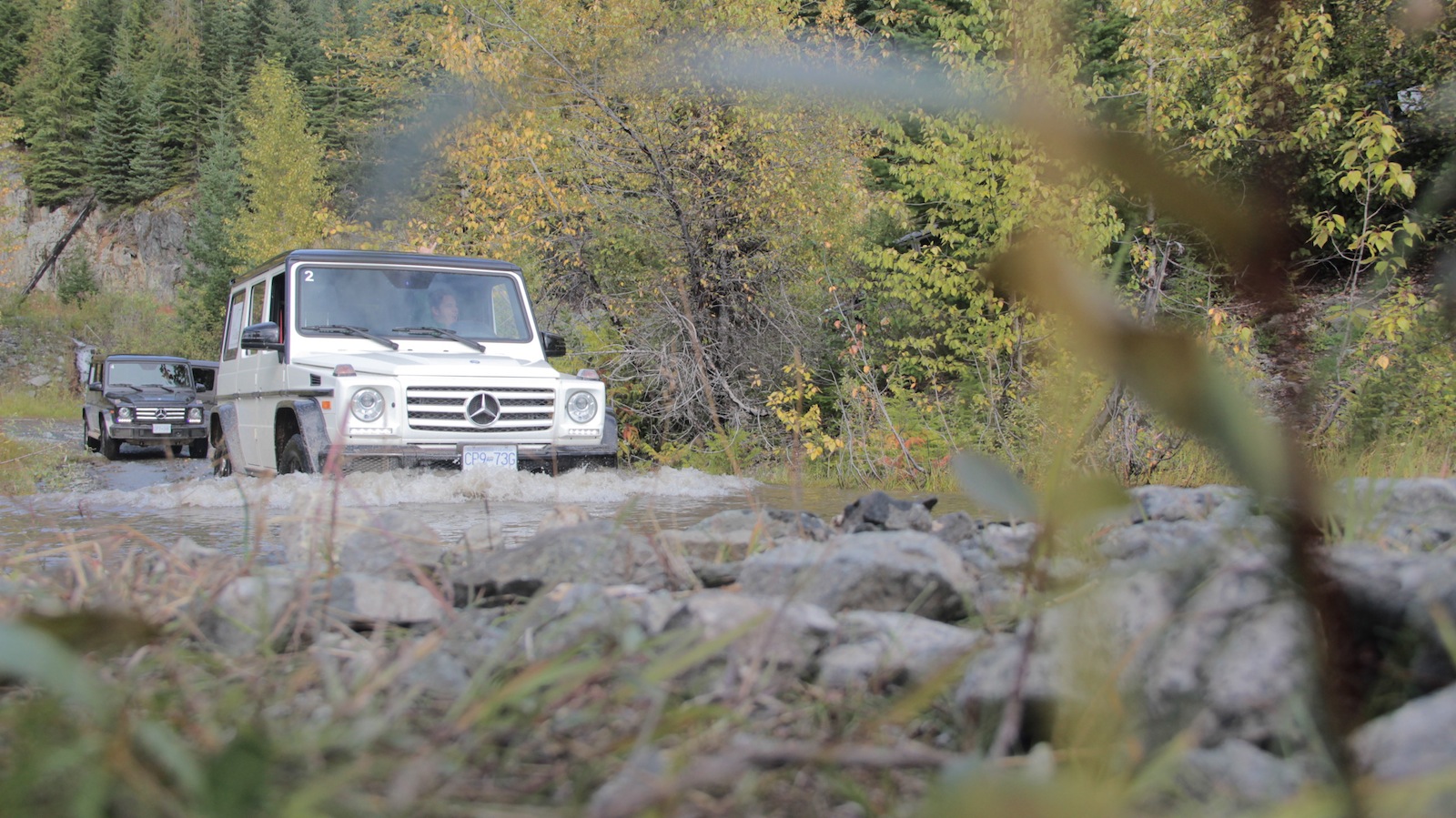 Every G-Class is ready to take on the extremes of the Earth and each one has been designed to so, although many of them will live in hills of Malibu and never see anything other than pavement. But thankfully, the G550 isn’t going soft just to serve its soft clients. And for those few customers who will actually tackle the desert, forest or jungle with a Mercedes G-Class, it will deliver time and time again.