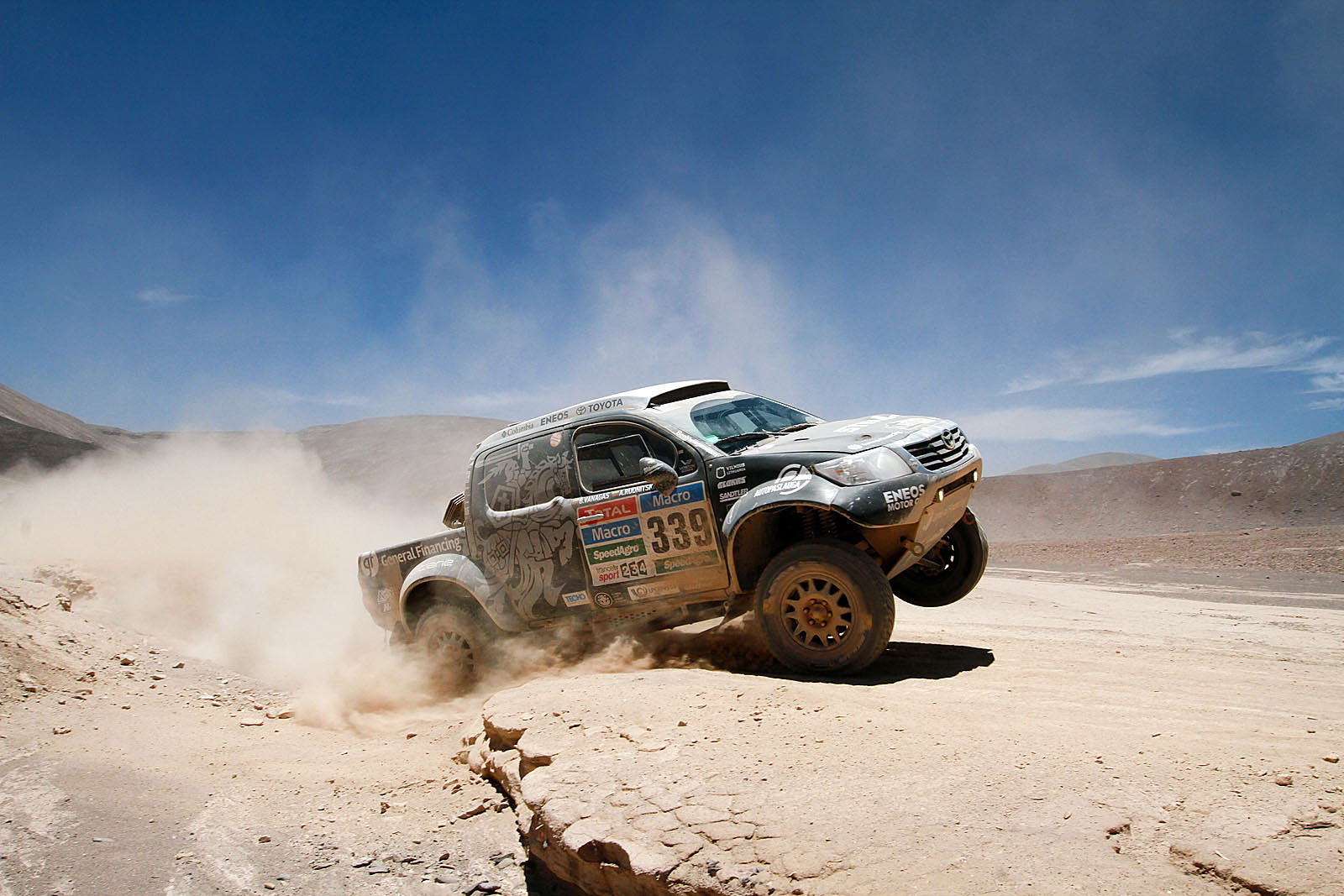 I would never have thought that I would be overjoyed with 6 hours of sleep outside with generators droning all around me, but with sleeping bag soaked with dew I woke up ready to trudge over passed the MINIs to get breakfast.

I was so blown away with the incredible landscape over the Andes yesterday that I didn’t expect to have the same impressions today. But the road along the Chilean coast, the ocean breaking against blackened rocks, a couple of sea lions bobbing about in the surf was again breath-taking. Apart from a few rough shacks on the beach the 700km between Copiapo and the wonderfully named Antofagasta was just a barren mountainous wilderness, nothing but a few traffic controls and roadside shrines… and a giant concrete hand.

The co-ordinates for the press point turned out to be a particularly remote spot of nothingness so we had to be creative and followed some dodgy tracks over the hills heading towards the lines of dust  we could see on the horizon. It took a while, I learned some Lithuanian swear words but we found the canyon and it was stunning. A dry river bed at the bottom of a deep gorge cut out of the grey, purple and black rocks. The sun was high, the wind was hard and it was the most perfect place to sit and watch the Dakar.

I saw the No 353 VW bug for the first time as well as Bryan Garvey, who was definitely one of the faster mid-fielders but the highlight of the day was seeing the trucks racing. A Kamaz drifting in the dirt, kicking up huge clouds of dust is the epitome of the Dakar. They stand 1, 2 and 3 at the top of the leaderboard and that’s how they went through the canyon.

From there is was a long and featureless drive. Gedmus doesn’t want to play I Spy with me anymore and because the organisers decided that they weren’t giving the lunch boxes out to press today we were all starving. It wouldn’t have been a problem if we could have stopped at a café… apart from the 700km of absolute nothingness…

It was very late when we got into the Antofagasta camp. All the big names had already left but our humble team was in good spirits. Benediktas Vanagas finished 14th today which means that he starts with faster people around him tomorrow. “But still, 100km out of the 458km we were in the dust so we still haven’t had a clean stage where we can show our true speed. On a flat straight track anyone can go fast but when the road is full of tricky turns and rocks it takes a very experienced and capable driver to go fast and on the mining roads that were very like the WRC my years of rallying experience really came in useful. There was a section of rocks that was like a 4×4 trial and I’ve done hard off-road events as well so everything was OK. Tomorrow we have a lot of sand which is always hard but I at this stage in the event I am happy with my position… and anyway, we are probably the smallest team in the Top 20 and don’t have the budget to go flat out. If I did I could go much faster but would have to change a gearbox and driveshafts every evening.”

Tomorrow is a 4:30 am start for us so I am not going to wonder around the camp, I am just going to find a place to curl up in and sleep!