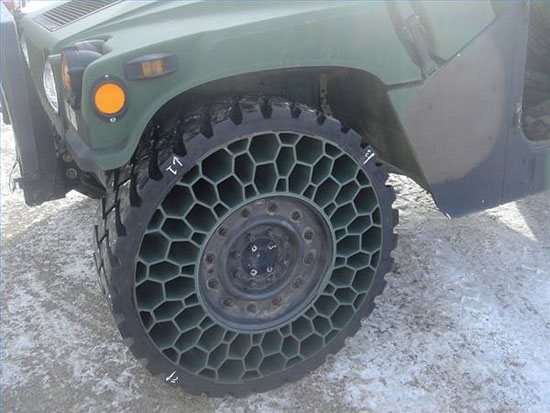 Since Michelin’s been dragging its wheelsforever on the Tweel project, Resilient Technologies announced a competitor called, unimaginatively, the Non-Pneumatic Tire (NPT), which is being developed with US Military cooperation with planned prototype delivery scheduled for late 2012.

The US military Humvees currently operate with a pneumatic tire with a run-flat donut insert. After a “ballistic event” where pressure is lost, the trucks can limp away at 30 MPH for up to 30 miles. The Resilient Technologies NPT is designed to operate at full capacity after an event with no limit to top speed or range.

The honeycomb-shaped wheel with rubber tread are comparable in weight to the current wheel/tire combo installed on Humvees but have a 100,000 mile service life with the option of retreading at the end and are essentially blast proof. The company is currently developing and testing the units with prototype delivery to military testing officials planned for 2012 with intent is to bid on a big fat juicy contract and ramp up production. In addition to being safer for soldiers with a longer service life, as you can see if you’re able to look past the booth professional annoyingly getting in the picture, they also look pretty cool.

This site uses Akismet to reduce spam. Learn how your comment data is processed.