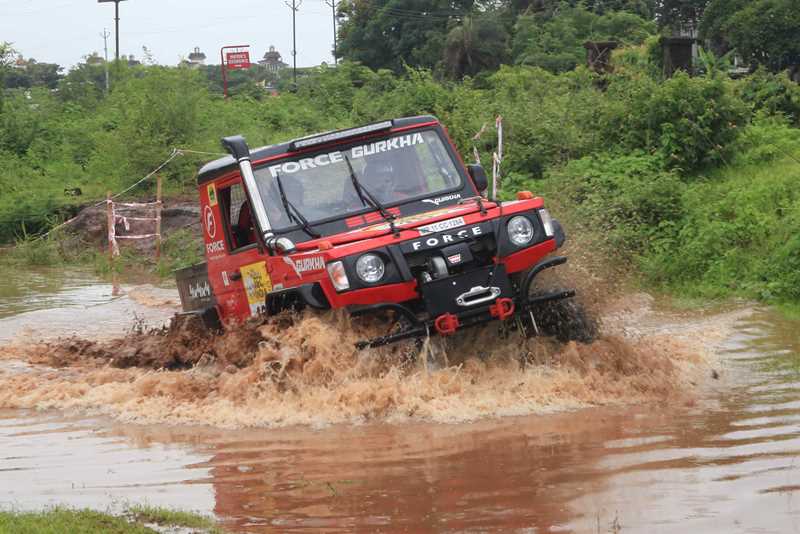 [Not a valid template]

When rain showers and dark clouds dominate the sky during the South West Monsoon in August, when the heavy precipitation transforms the dry, dusty trails into formidable and punishing terrain and, when most tourists skip the rainy season in the State of Goa (India) – it was time to unleash the inaugural Indian chapter of the Force Gurkha Rainforest Challenge (RFC)! This historic debut was brought about by Cougar Motorsports, the New Delhi based RFC India Representative;

This fits perfectly with the state’s tourism plans of promoting Goa in the hinterland during the monsoon season; “It is a sports and adventure tourism activity unrelated to the already numerous beach events and concerts, but one which attracted hundreds of off-road enthusiasts coming from all over India in various categories like race teams, support crew, officials, sponsors and outdoor adventure fans,” commented Ashish

Gupta, the Founder of Cougar Motorsports;

It also attracted the attention and passion from Force Motor Ltd, so much so that they not only signed up as title sponsor, but also send in 3 specially modified factory backed  Force Gurkha 4×4 teams into the race for the first time in an extreme motorsports event;

By battle proven in a real situation like in the RFC, which is dubbed as one of the ten toughest motor races in the world, speaks volumes for its image and brand positioning as “a machine built for war;” Also, it was a perfect launch pad to build goodwill with their existing customers as well as reaching out and targeting potential ones, according to its MD, Mr Prasan A Firiodia;

Gearing Up for Battle

At the International Centre Goa (ICG), Dona Paula on D-1 day of 8 Aug for the scrutineering, the participants came from north to south of the nation, which in itself is a record for a 4×4 event in the country; Everyone made an impressive entry, from the bright red coloured factory backed Force Gurkha teams to other Indian individual entries coming in other makes and models like Mahindra Thars, CJ3BS, Willys and Gypsies; With impressive modifications to match not seen in any other national level 4×4 event and a high degree of preparedness in both hardware and software –  they have come geared up for battle;

Even though the RFC format is totally new to Indian off-roader teams, they were undeterred in mind and body, they came, wanting to be counted as the first Indian 4×4 warriors in this historic RFC India and they accepted the challenge – including an all Indian Ladies entry from Bangalore, Team 123 of Smitha Prasad and Sapna Gurukar;

However, during the course of the event, due to unforeseen family matters, Sapna had to exit, and was replaced by Ms Juraida (Aida) from Malaysia; For everyone taking up the challenge, more importantly, they planned to complete the event;

However, for Force Motors,, they used a time proven strategy of roping in the experienced champions from the mother event RFC itself and a national rally champion to drive their 3 Force Gurkha 4x4s specially prepared for the race and, it paid off handsomely at the end of the event, with a Top 1 & 2 podium finish;

D-Day: From the word “Go” at the Prologue Special Stages (SS), everyone sprang into action, some did with gusto while the others treaded cautiously; “Since this is the first time ever RFC in India, the 12 Prologue SS were purposely designed to enable the local drivers time to test their driving, maneuvering and recovery skills and testing the ability of their machines across undulating terrain, slanting slopes, streams, basic winching and including changing tyres using a high lift jack,” commented David Metcalfe, the Course Master from RFC International; The Prologue SS were, indeed, “warming up” stages for the teams to collect points and getting to know what their cars could or could not do, before they progress to the more demanding stages at the Predator and the Terminator;

The monsoonal rains that fell in heavy showers in the morning and afternoon made the going much harder for some with more water and soggy conditions, while the others did with gusto, but most of all, it was a good learning curve for everyone; At the end of the second day, it was no surprise that the more experienced Force Gurkha teams took the lead and they maintained their pole positions throughout the event;

After the Prologue, as the teams entered into the Predator leg, the terrain turned rugged, the rains kept hammering down with heavy showers, and the test of man and machine became tougher; The SS also increased in the level of difficulty; The participants had to use their driving and recovery skills to overcome deeper ditches, steeper slopes, uphill climbs and harder winching exercises from SS13-18; While some faltered along the way, others progressed further and adding to their level of confidence;

By the time of the Terminator leg at DOT, Sanguem, South Goa forest belt, the stronger teams had prevailed as they fought SS19 to 24 tooth and nail to clinch as ,many points as they can before the Twilight Zone (TZ); The SS were designed to test how best the teams can maneuver in and out of the seemly impossible tasks including steep inclines, twisting and turning sharp corners overcoming rocks and water; “Here, the leading contenders have shown that it takes ability and true grit to overcome such insurmountable obstacles,” said Shashi Garcha, the Competition Manager;

The dreaded Twilight Zone (TZ) turned out to be elusive after the teams made a strategic decision to turn back from this long abandoned tracks, with safety as one of the factors; The way forward was blocked with insurmountable obstacles and the time factor was also not on their side; However, the advance and subsequent retreat from the TZ was done with great camaraderie helping each other to maneuver through the thick jungle maze; Even with the retreat from the TZ, they still had the chance to live through an unforgettable bonding, which is one of the essences of the RFC;

In six days, the event transformed the Indian 4×4 landscape forever; a turning point as far as off-roading competitions are concerned which also witnessed off-roaders from all over the country converging in one event; Not only did the participants pushed themselves and their machines to the limit and beyond in the SS, but they have also proven that in six months, they were able to come up with machines that could withstand the challenges thrown at them; There are many hidden talents in India, which were brought out by the RFC here;

“For the 4×4 warriors listed in this historic event, they have also learnt that it was not only a test of mettle but also team work, patience and perseverance to reach the top positions – lessons well learnt for the next edition for sure; but, most of all, they all know that they are winners for completing this 1st edition of RFC in India,” summed up Luis J A Wee, the Creator & Founder of the RFC;