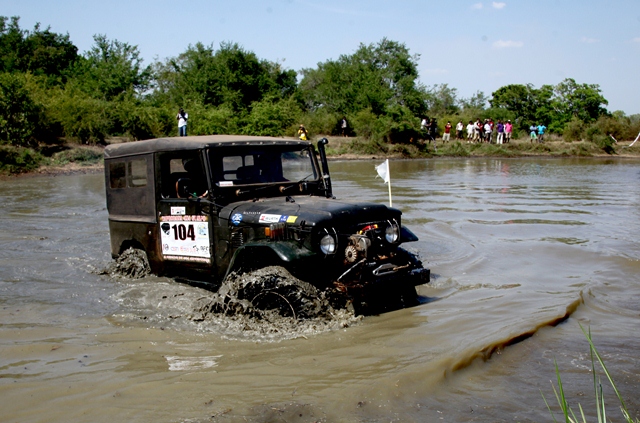 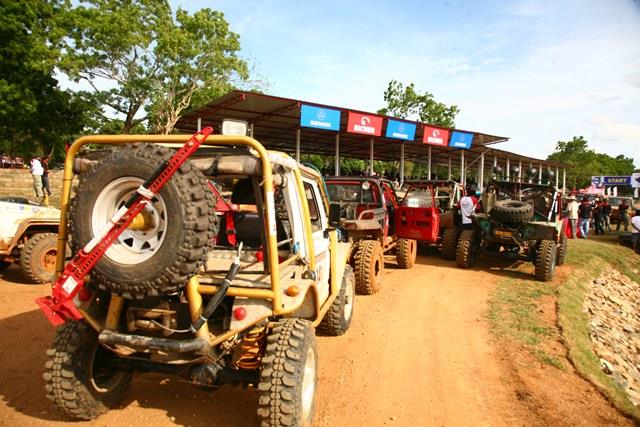 The 4×4 fight for supremacy is a sports tourism product put into practice at the recently held Taprobana 4×4 Challenge, a RFC Global Series event of RFC Sri Lanka 2013. The 10th anniversary Taprobana of FWDC was celebrated in conjunction with Sappers 4×4 Gympo of the Sri Lankan Army Engineering Corps with a flagging off ceremony on 5 Oct in Colombo attended by the top brass of the Sri Lankan Army with Chief of Staff Maj General Krishanta de Silva as the VIP guest of honour.

18 extreme competitor class teams and 24 novice class entries made it to the starting line including foreign entries from Malaysia, Australia and India. Apart from the local print and electronic media, the overseas media support came from Thailand, Lebanon, Russia, India and Malaysia including editorial reports from Spain, Hungary, Vietnam, Italy, China, Singapore, Australia and New Zealand. 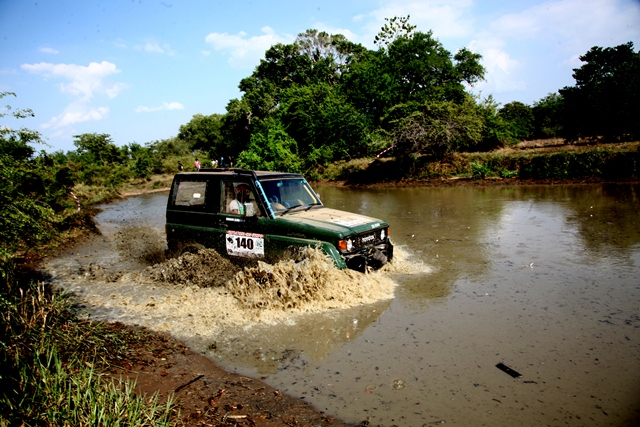 6 Oct was a historic and memorable start with a train transport day for 27 4×4 vehicles (comprising of teams, officials and media) via a special train ride from Colombo Fort to Eravur station in the Eastern Province. This is the first in the country and among the very few in the world to have 4x4s transported by train. It was a nostalgic journey of serendipity savouring the culture and customs of the countryside and rustic villages along the way, a fitting time to touch base with the local charming people of Sri Lanka.

Army Engineering Corps have cleared this eastern region of mines left behind by the separatist war. It was at this Thoppigala area that the campaign to oust the rebels began and culminated with final victory in May 2009. “Now, with the dawn of peace, on-road or off-road, the region is open for tourism and business, the east is best,” said the Chairman of Eravur Urban Council, Ali Zaheer Moulana at the rousing welcoming night reception for the participants. 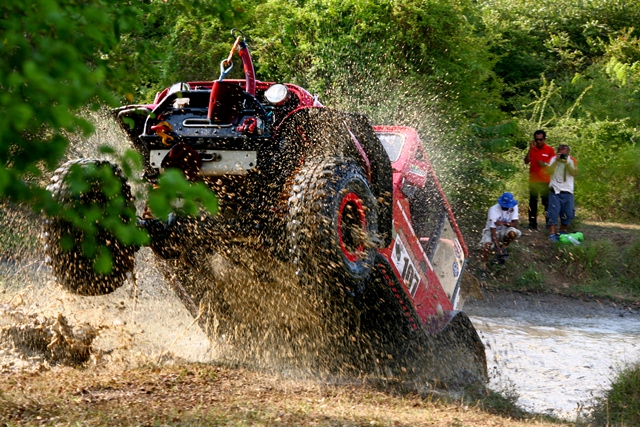 The taste of dry heat, rocks and sandy river banks gave the teams a tough challenge here at this recently cleared rebel territory of Thomppigala. For the 2 Special Stages (SS) held here, it was not how tough your vehicle is, but the challenge is how tough you are in getting out of the obstacles using a combination of driving and technical winching.  It was a mentally daunting task for the competitors as they shake, rattle and roll across the bushes, rocks and sand.

“Despite all these hardship, it was very heartening to see the teams putting up a great effort to finish the SS especially from Indian Team 103 Mahendran Kirubanidhi in a modified Maruti Gypsy.  It was an inspiration to see him and his co-driver of never giving up to finish the SS,” said Sean Hameed, the Event Director. From dry heat to cool nights, it was indeed a thrilling time at Thopiggala. 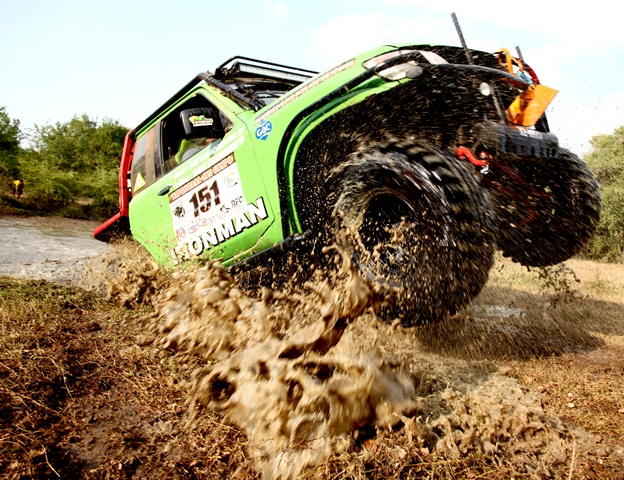 The main base camp of the event was beside a lake is located at the foothills of Thopiggala just behind the war museum and commemoration centre. This also was the main rebel campsite during the war years. It was cold in the night and scorching hot during the day however, with the cool mud huts and catering from the Army 7th Field Engineers, this ex rebel campsite was transformed into a resort-like experience!

By 8 Oct, the menu of the day was all about mud and river crossing which was a totally different terrain from the previous day. Although driving skills dominated the SS here, the winches were still put to the test at the river crossing. From Thopiggala to Kuda Oya,  there were more demanding tests from the undulating terrain to sandy grounds and from navigation to more winching exercises and from day stages to night stages for both man and machines. The daily roar of the engines and full blown 4×4 action were indeed the days of thunder depicting the hot passion of man and machines in a fight for off-road supremacy. 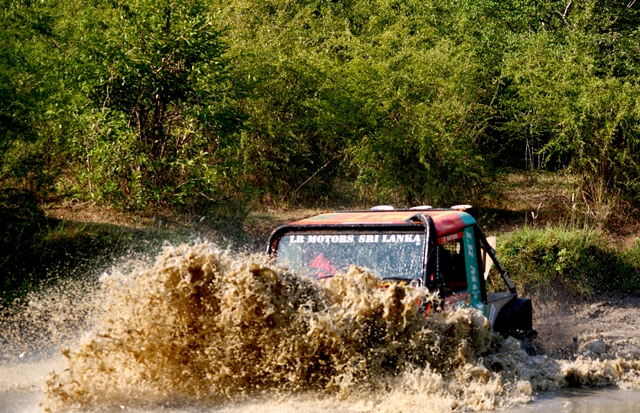 The leading contenders did not disappoint.  It was no surprise that Team 105 from LR Motors of Indika Sanjaya and Navin Marapana in their Land Rover Defender 90 led in the first 4 SS, they are the top seed from their previous wins in the event (having won 8 times out of 10). Indika’s driving was superb while Navin’s agility and ability to co-ordinate with Indika added to their unstoppable lead. Team 105 also had experience on the international scene in the mother event Rainforest Challenge (RFC) in Malaysia, in which they got 2nd Runner Up placing.

However, it was “new kid on the block” Team 123 of Mohd Fazdil / Mohd Hanafi from Malaysia who stole some of the show in the 20 SS. This up and coming “Young Guns” team made a promising debut here. They will be a team to watch in the mother event RFC in Malaysia in Dec.

Apart from the thrills and spills in off-road, the transport stages passed through some of the best tourist attractions on this eastern province with picture perfect resorts set along the serene beaches of Pasikudah and the fantastic waves of Arugam Bay (one of top ten surfing spots in the world). “The resorts, culinary delights, sights and sounds of wildlife and charming hospitality of the local folks plus off-road 4×4 are a unique feature of Sri Lanka, a worthy destination under the RFC Global Series,” remarked Luis J.A.Wee, Founder of the RFC.

Finally, after the jungle stages, it was time for the show-time Super Stages of Sappers 4×4 Gympo held at Sappers Track of the Sri Lanka Army School of Military Engineers at Tunkama, Embilipitiya where the last 6 SS were held on dual tracks with water, mud, uphill and downhill obstacles. The hot action here put a finale touch to the event for the extreme class after the rough and tumble of the jungle stages. It was also a great day for the 24 touring class (standard production vehicles) as they zoomed across the SS with gusto. From the look of teams’ spirit for 4×4 action, the off-road racing sports is alive and well and on the way to producing more quality 4×4 teams in the future. 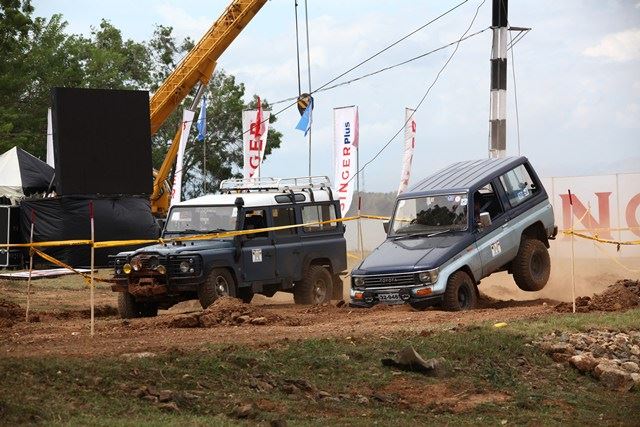