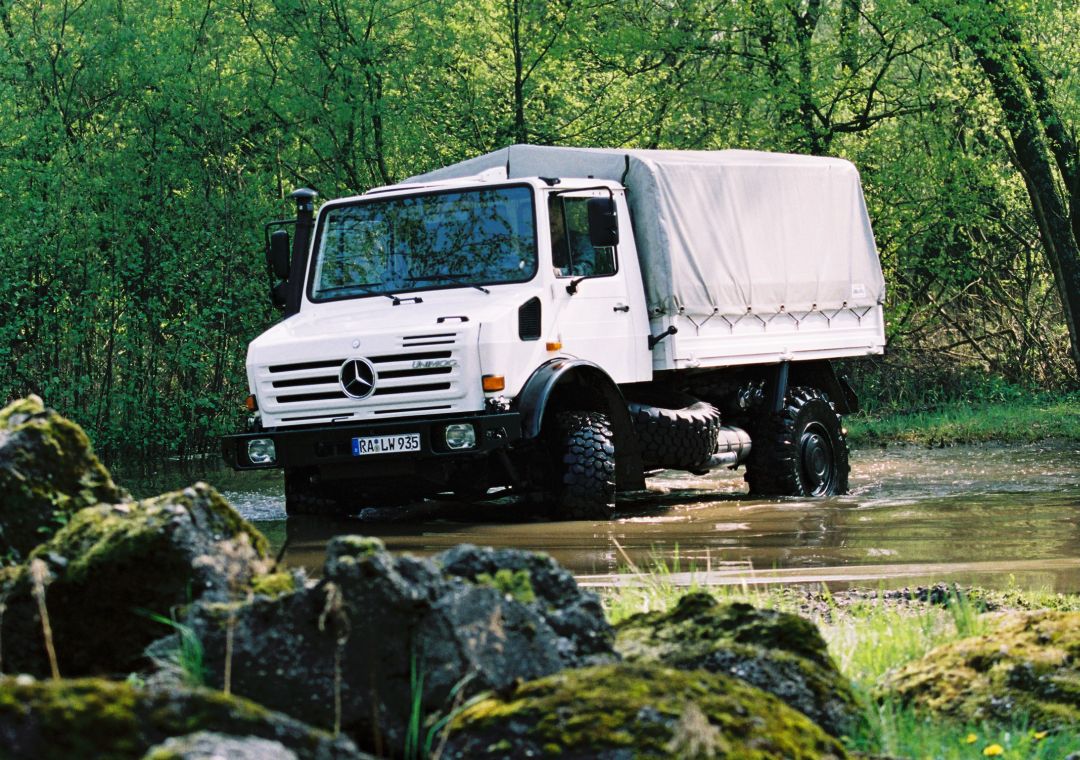 There are quite a number of automotive legends – most of them are already covered by the dust of history, however. Not so the Mercedes-Benz Unimog: launched during the hard times immediately after the end of World War II. The indestructible Unimog has become one of the living legends in automotive engineering. UNIMOG is a multi-purpose all wheel drive vehicle manufactured by Mercedes-Benz. UNIMOG is an acronym derived from: UNIversal-MOtorGerät (universal-power-unit). The Mercedes Unimog is, without too much argument, the most capable and best Four Wheel Drive in the world! over 298,779 were produced from 1948 through 1993.

Unimog started in December 1945, developing a highly specialized vehicle for agriculture. His concept was for a four-wheel drive, self locking differentials, high ground clearance (by rigid portal axles), with power take offs at the front and rear, a small loading platform, a driver’s cab for two people, extremely low speed for working in the fields, and with highway capability for up to 50 km/h (30 mph).

The project started in a factory at Schwäbisch Gmünd, in southern Germany equipped with a 4-cylinder, 1.7 liter gasoline engine. Still lacking in 1946 was a good quality diesel engine and the name for this new vehicle, which was neither a truck or a tractor.

UNIMOGs career as a military vehicle actually started in 1955 when Western Germany again became a sovereign country and a member of NATO. It was at this time that the new German Army, the Bundeswehr was created, in January 1956, Daimler-Benz had demonstrated another UNIMOG. It was the 1-1/2 ton U 404 or UNIMOG-S with a 2900 mm wheel base, 82 hp, 6-cylinder gasoline engine 2.2 liter from the Daimler Benz’s 220 car, and a 24 volt electrical system.

Due to its portal axles the 404 had a ground clearance of 40. Speed ranged from 1.5 km/h up to 95 km/h. The fuel consumption was legendary. Although the official figure says 18.5 liters per 100 kms Like the Willys Jeep the UNIMOG has a unique engine sound! Once heard, you will never forget it. Cross country the UNIMOG is unbeatable with its portal axles, front and rear differential locks, 6 forward, 2 reverse gears, and an angle of departure of 46 degrees .

There was one cargo version, empty weight 2900 kg, maximum weight 4400 kg. Some of these were equipped with a special five seat cab and mostly used for driver school tasks. There was also a standardized house-type van available that could be configured as an ambulance, a communications or a maintenance van. An additional modification was configured for a fire-fighting vehicle . The Kässbohrer company at Ulm/Donau manufactured an APC version of the UNIMOG between the years 1956 and 1960. This APC was similar to the German HS 30. They also manufactured a Main Battle Tank (MBT) version, similar to the Soviet T-54 tank.

At that time each standard UNIMOG sold for 18,000 DMs which then was the equivalent of $4,500 US dollars.

Delivery of these vehicles started in May, 1983 and they were designated for use in engineering companies, 1 each, and armored engineering companies, 2 each. Another 3,000 ambulances with van body and about 100 fire-fighting (Feuerlösch-Kfz 1000) vehicles for GAF and army aviation were part of this order. Some of the smaller U 406 versions were bought for the Luftwaffe as aircraft towing tractors. The army (Heer) and navy (Marine) ordered, for their engineeringh units, some U 421 dump trucks and U 900s with excavators.

The newest versions of the UNIMOG family are the light/medium types U 90/110/140, introduced in 1992. Heavily modified, they have the typical new front cab which makes for better visibility with front-mounted equipment. They have transmissions with up to 22 forward and 11 reverse gears and are equipped with an automatic braking system. Their speed ranges from 360 meters/hour (393 yds./hr.) up to 106 km/h (66 mph). They have a grade ascending ability at maximum of 100 percent and fording depth without equipment of 80 cm (31.5 in.) Nearly 30% of all UNIMOGs produced today are light/medium types.

This site uses Akismet to reduce spam. Learn how your comment data is processed.